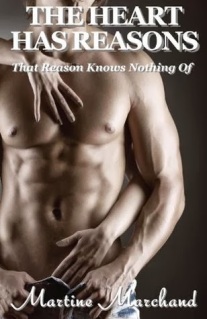 **Be warned – there are spoilers in this review. BIG ONES!**
Well, this one just puts me in a conundrum. How can you end up hating both of the main characters and loving the story? HOW?
Martine Marchand has managed to write a story where I ended up hating both the Hero and Heroine, yet loved the story. I’m still not exactly sure how exactly that happened, but it did.
Let me explain…..
Larissa had a stalker two years ago. He broke in, she shot him, he got away. Now, she’s buffed up on marital arts, a gun, and defense techniques.
Chase has been hired by her stalker to bring her from Charleston, SC to California. Chase thinks she’s an errant wife that needs to be returned to her husband.
OK. First off, even if she is an errant wife, Chase has NO RIGHT to kidnap her and return her to California. Plus, he just took the stalker’s word. No research, nothing. Butt head! You would think Special Forces would be smarter than that. Guess no in his case!
Larissa I started out liking but ended up screaming at her through my Kindle. I came close to throwing it through the window on numerous occasions. I’ve now dubbed her TSTL (Too Stupid To Live.) We’ll get to why in a few minutes.
I started out really liking Larissa. She was a bit overly cautious, but I get why. However, she wasn’t a victim. She fought, she cajoled, she argued, she pleaded. She did everything she should to try to get free. She even had sex with him in order to try and get free. I get that. I would do it. I would do anything to get free. I don’t blame her, I applaud her. Do whatever it takes.
Chase is slimy at this point. One, he’s dating someone, yet he has sex with Larissa. Plus, he thinks she’s married and he has sex with her. Total slimeball material there.
Chase was stupid too. Beyond stupid. When she tells her story to Chase, he doesn’t check it out. He just decided her husband/stalker is telling the truth. Dude, check out the Internet sometime. It’s amazing what you can find.
One of the things that really irked me was the description of the path they took from SC to CA. I couldn’t figure out how they hit the states they hit. I travel that path often and still can’t figure it out. Once I got past the geography lesson I got back to the story.
Larissa gets delivered to her stalker. Chase leaves. Larissa fights to the bitter end. She knows she’s gonna die a horrible death, so she plans to fight all she can. Good for her! Go for it!
Chase comes back, rescues her. Here is the TSTL moment. She LETS him get away. Then she LIES about her kidnapper, Chase. OMG! REALLY? She lies repeatedly. All to keep him out of jail
So, then we decided it’s Stockholm Syndrome. She says no, I still say maybe. If not, she’s TSTL. If it is, I feel for her, she needs help.
Now, at this point the story took a turn I was not expecting. In fact it was an amazing turn and I was quite impressed with it. I fully expected that since Larissa never saw Chase’s face on the trip or the rescue by Chase, he would just show up in Charleston later on, get to know her and then she’d figure it out. But Nope! Didn’t happen that way.
We got to see the investigation and the FBI agents trying to convince Larissa to turn Chase in. She remained steadfast and continued to lie for him. Chase was steadfast too. He didn’t want to go to jail. Although he did consider confessing when he thought Larissa had been arrested. That earned him a brownie point. But he’s so far in the hole, he’ll never see the light of day in my eyes.
So, with all of this how come I liked the story?
It’s different. I’ve read captive stories where the captive falls for her captor. All the ones I’ve read before were situations where the captive was conditioned to fall for the captor. A true Stockholm Syndrome or conditioning environment.
This story was not that. It was different. I can’t completely rule out Stockholm Syndrome, but it just doesn’t feel that way. Martine didn’t take the easy route with the resolution. In fact, we took the brutal path. It made the story better.
So, even though I ended up hating both Chase and Larissa, I liked the story. Well played Martine…well played.
Find it on GoodReads!