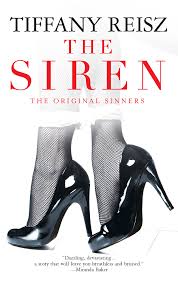 My God… What did I just read?

I’m not even sure where to begin when writing this review because my thoughts are seriously all over the place. For starters, I honestly had no idea what to expect going into this book- I mean, I knew it was going to be completely different from the typical romance novels that I usually read… I just wasn’t sure how I was going to feel about it. To say that I was more than a little hesitant to start this one would be an understatement. Needless to say though, my mind has officially been fucked… Pardon my language. …And for the record: If that kind of language offends you, then for the love of God just stay away from this book. Lord knows a four lettered curse word is tame compared to the type of shit that goes on in this story.

I refuse to go into any extreme specifics about this book- If you have absolutely no idea what to expect when reading this, then you’re in the right frame of mind to dive in. …But just in case you’d prefer a little insight before going into this book, I’ll give you the quick run-down without giving anything away… For starters, this story features four important characters, all with multiple story-lines and all which are linked together by one woman…
Enter Nora. She’s one bad-ass kinky bitch and I loved her character to pieces. She’s not typically the type of heroine I love to read about but everything about her worked for me in this book and I wouldn’t have wanted her any other way. She was an author of many bestselling erotic romance novels, but her writing meant more to her than just a paycheck… It was her outlet for pain and loss after ending a thirteen year relationship with her soul mate Søren. However, Nora’s lifestyle behind closed doors was the sole means of her support. She worked as a professional Dominatrix, and a damn good one at that. She was beautiful, bold and not afraid to speak her mind… A rare and deadly combination for a woman. However, she only ever allows others to see what she wants them to see. Underneath her wild facade was a woman who was not only broken, but hurting over her past relationship and confused on what it was she truly wanted.

Her latest novel is extremely personal and she wants to make sure that the book becomes so much more than anything she’s ever written before. The only way to assure that happens, is by having only the best editor out there who’s willing to reshape her writing and make sure it’s the best that it can be. Enter Zachary Easton… The man can definitely be an asshole on pretty much every occasion but he’s there to get the job done, forgoing all sugar-coating. Nora is instantly drawn to both him and his smart-ass remarks but she’s able to see what he so clearly tries to hide… His hurt. Yet, the more time that passes between these two, the more time they spend together and soon enough Nora tries her best to reveal all his secrets- But not without Zach discovering a few of his own..
Enter Wesley… Her nineteen year old roommate and still a personal favorite character of mine in this story ever. He’s such innocent perfection and completely in love with Nora. These two were so completely different from one another but despite their differences, they were still the very best of friends. The thing I loved the most about Wes, was the fact that he accepted everything about Nora… That is, almost everything…Enter Søren. ♥

I can’t even… There are no words. I absolutely love Søren. As in, I want his sadistic ass to beat me pregnant. Sound harsh? It should. After-all, the man is a Sadist who can only get off by inflicting pain on someone. Now before you get all judgmental on my ass, know this: Nora is absolutely everything to him… And him to her. Søren was Nora’s former master… Her everything. He may lead a very unusual lifestyle but it’s who he is and she wholeheartedly accepts that- In fact, she loves it. He’s by far the darkest character I’ve ever had the pleasure of reading about. He’s an extremely hard man to understand and his need to hurt and possess overpowers everything about him. Although it’s always consensual, he’s a man who loves to inflict pain on others. Not many people would agree nor would they accept his lifestyle… But I understood it because I was able to see that there was so much more to his character than the darkness that lived inside him.
Honest to God, words can’t even describe how I felt about this book- It’s definitely one hell of a start to what I can only assume is going to be an amazing series. Tiffany Reisz is without a doubt one of the most talented authors that I’ve ever come across. She’s a God at being able to convey so many emotions, sometimes even without being too explicit.

Just a little forewarning: This isn’t your average love story. It also isn’t a book revolving strictly around sex. It’s so much more than that. So if you’re looking for the typical damsel in distress that gets saved by the heroic knight theme, then you need to look elsewhere because you won’t find it here. Does that take you out of your comfort zone? Maybe even scare you a little bit? Good. This book can be disturbing and it will most definitely push you beyond your comfort zone. Yet at the same time, it will hold you utterly captivated from the first page to the last. This is a story that should be read with an open mind- You’ve got to prepare yourself to expect the unexpected because you most definitely won’t get anything less. …Now, I’m off to the next book in this series! (The Angel)

2 thoughts on “Review: The Siren by Tiffany Reisz”