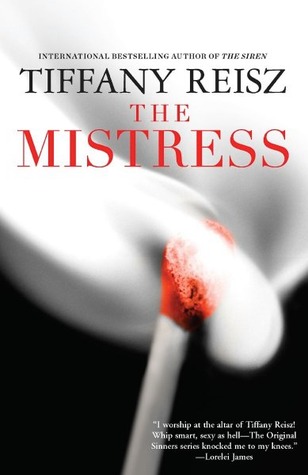 I can’t even…….. There are no words. Absolutely no words will be able to justify my feelings for this book. If you haven’t read this series yet, then what the hell are you waiting for you may want to avoid reading this review any further because it’s going to have some spoilers- You’ve been warned.
For the love of God, this book was a masterpiece. Pure and utter freaking perfection. The most magnificent ending to an amazing series. Absolutely flawless. I could seriously go on and on but most importantly, just know this: This is by far the best book of the series- I devoured it to pieces, not that I’m surprised since the other books in this series didn’t disappoint either.

…So this story picks up where the third book (The Prince) left off. …And just a little recap, Mistress Nora has been kidnapped by Kinglsey’s sister Marie-Laure.

She’s beyond pissed and wants revenge for all the things that have happened not only in her past but in the present as well. The bitch is literally off her rocker- Enough said.

So, without giving too much away to those of you who have yet to read this installment yet, just know that every single one of these characters face some extremely difficult decisions and circumstances in this story. …But what makes this book even more interesting is that we’re able to get more insight into all of the characters we’ve grown to love, along with being introduced to a new one, whom I absolutely adored.

Everyone is on a quest to save Nora and in The Mistress we’re able to see just what lengths people are willing to go through to do so. Oh, and just a little FYI: If you’ve ever had any doubt as to how much Søren loves Nora, then this book should be a huge eye opener for you. There were times when I was conflicted when it came to their relationship, but never once did I feel like Nora didn’t mean much to Søren or vice versa…

However, this book takes his feelings to an all new level and we were finally able to see just how far he was willing to go to show his love in the only way he could. God, I love that man. ♥ …And speaking of my men, I fell for Wesley and Kingsley even harder in this book than all of the others combined. No one tops my feelings for Søren of course, but the naughty Frenchman definitely gives him a run for his money at times.

Nora, of course continues to stay so unconditionally strong and fucking hilarious. She’ll literally have you laughing your ass off, despite all circumstances. I tend to really try and avoid heroines with strong and over-powering characteristics but she’s definitely one of a kind.
The woman is without a doubt probably my favorite heroine ever, and that’s saying a lot. There’s no one like her out there and surprisingly, it’s the things that I tend to dislike so much in other heroines that I absolutely love when it comes to her.

For the record, not everything was tied up for us in a perfect ribbon at the end of the book- Not that I’d expect that though. When it comes to Tiffany Reisz’s style, it’s just not expected. …And believe it or not, I actually really loved how things turned out- So much was eventually resolved, especially when it comes to the three most important men in Nora’s life. With that being said though, I did feel like the story was wrapped up a little too quickly. Now to be fair, it’s only natural to want more when it comes to these characters… But after being in suspense for more than half the book due to Nora’s kidnapping, everything just sort of resolved at lightening speed. I don’t feel that it’s right to complain about it too much though… After-all, this isn’t the last we’ll see of these characters…

So to say that this book was fucking epic would be the understatement of the year. I can only hope that The Priest: A Romance becomes available and in my hands as soon as possible. …As in, yesterday.

★PS: This book can NOT be read as a stand-alone so if you’ve yet to read the rest of the books in this series, be sure to start with these first: