Jerk. Asshole. Douchenozzle. Admit it- you hate to love the jerks. That alpha male character who is so arrogant and rude but sexy as hell. That foul mouthed douche bag of a man who rocks your traitorous heart. We’ve all read them and we’ve all liked them to some extent. In real life you wouldn’t touch the man with a ten foot pole. But in the fictional world? Nothing can stand in the way! Everyone would be lying to themselves if they didn’t admit that the meaner the man, the further we run… Towards them! *sigh*

That’s what this weekly meme is about- those jerky delicious men! Each Friday this meme will go up, and you can share your jerk anyway you want: review, interview, lines and quotes, giveaway of a book. However you want! All you have to do is sign up HERE and follow the linky. Any time you comment on someones post, leave your link so that person can comment back. 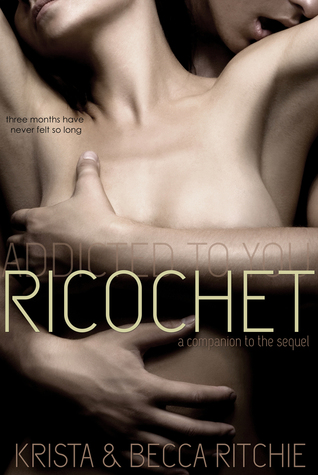 Ricochet might be one of the BEST novellas I have ever had the pleasure of reading.

Actually, it is the BEST. No joke.

I personally stay away from novellas unless it’s an absolute dire need that I read one. Otherwise I never open them up. Truthfully, they do nothing for me, but Ricochet doesn’t read like a novella. It reads like a full length, powerfully moving book that me pulled in deep from the first page until the last. And that last page… Dear Lord how I wanted more that instant!

As a sex addict, Lily Calloway must do the impossible. Stay celibate for 90 days.

Cravings and fantasies become her new routine, but while Loren Hale recovers from his alcohol addiction, Lily wonders if he’ll realize what a monster she really is. After all, her sexual compulsions begin to rule her life the longer she stays faithful to him.

Progress. That’s what Lily’s striving for. But by trying to become closer to her family—people who aren’t aware of her addiction—she creates larger obstacles. When she spends time with her youngest sister, she learns more about her than she ever imagined and senses an unsettling connection between Daisy and Ryke Meadows.

With Lily and Lo’s dysfunctional relationship teetering and unbalanced, they will need to find a way to reconnect from miles apart. But the inability to “touch” proves to be one of the hardest tests on their road to recovery. Some love brushes the surface. Some love is deeper than skin.

Lily and Lo have three months to discover just how deep their love really goes.

Includes the first chapter to the sequel Addicted for Now.

Companion to the Sequel: A full-length New Adult Romance that continues where Addicted to You left off. As a companion novel, it bridges the gap between the first and second book. It is highly recommended to be read before Addicted for Now.

Those are the three words Lily Calloway fears the most. But Loren Hale is determined to be with Lily without enabling her dangerous compulsions. With their new living situation—sleeping in the same bed, for real, together—Lily has new battles. Like not jumping Lo’s bones every night. Not being consumed by sex and his body.

Loren plans to stay sober, to right all of his wrongs. So when someone threatens to expose Lily’s secret to her family and the public, he promises that he’ll do anything to protect her. But with old enemies surfacing, Lo has more at stake than his sobriety.

They will torment Lily until Lo breaks.

And his worst fear isn’t relapsing. He hears the end. He sees it. The one thing that could change everything. Just three words.

Here is a teaser to Addicted For Now!! I’ve been lucky enough to read an advanced copy of this book, and I have to say it’s UNBELIEVABLE! Even better than the first book!

It’s a 2 for 1 giveaway!!!
Not only are Krista and Becca having a SWEET giveaway, but I posted one in the beginning of the month for all of the ebooks that you can still enter! Click here for the link!!
Don’t forget to leave your email in the comments so a winner can be contacted! Thanks and Good luck!!!
a Rafflecopter giveaway//d12vno17mo87cx.cloudfront.net/embed/rafl/cptr.js

Jerk. Asshole. Douchenozzle. Admit it- you hate to love the jerks. That alpha male character who is so arrogant and rude but sexy as hell. That foul mouthed douche bag of a man who rocks your traitorous heart. We’ve all read them and we’ve all liked them to some extent. In real life you wouldn’t touch the man with a ten foot pole. But in the fictional world? Nothing can stand in the way! Everyone would be lying to themselves if they didn’t admit that the meaner the man, the further we run… Towards them! *sigh*

That’s what this weekly meme is about- those jerky delicious men! Each Friday this meme will go up, and you can share your jerk anyway you want: review, interview, lines and quotes, giveaway of a book. However you want! All you have to do is sign up HERE and follow the linky. Any time you comment on someones post, leave your link so that person can comment back. 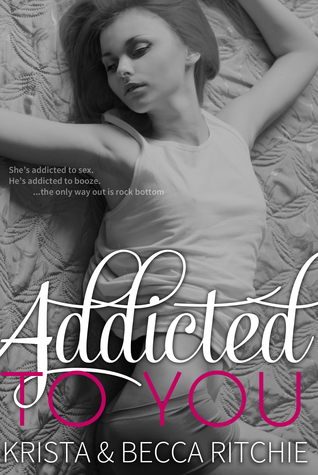 Addicted to You is not your typical romance book. It’s unexpected and raw and one that I’d never read before. Truthfully, I was immediately pulled in by the blurb and cover- It was different and unique and had me very intrigued. It wasn’t about a romance that pulled me in, it was about a real life struggle as the main focus with a side of attraction. I absolutely love reading books where the characters are flawed big time, especially ones that have addictions. And Addicted to You has two type of addictions… *sigh*

Lily and Loren (also known as Lo) have been the best of friends since they were kids with their families just as close. As they grew, they learned to use each other and fool all those around them to hide their addictions. One was sex, the other alcohol. It was the perfect plan, really. They faked a relationship where no one suspected a thing for many years until Lily’s addiction began spiraling out of control. For Lily, everyone she’d been with was faceless. But when more people started noticing her around and making comments is when Lo decided to step in. He wanted to help her and be there for her, but how could he when he was just as bad? If not worse? Lo couldn’t tell her to stop because then he would have to stop himself, and there was no way Lo was giving up his whiskey. Especially when his family life was the root of his addiction. But when Lo begs Lily to give him a chance to help her, little does he realize that his plan backfires on him and they both become addicted even more so than before. Or could it be that they’re addicted to each other? Emotionally, it’s almost too hard to tell. Chemically, they’re headed for an overdose.

I’ve never read a sex addict before let alone a realistic alcoholic together. That right there is what grabbed me. Lo and Loren are true addicts in every sense of the word. The authors really managed to capture what an addict goes through and the struggles they deal with on an everyday basis and form it into a gripping story of what could be defined as a bad romance.

But it’s not… it’s not a bad romance. It’s hot as sin and meant to be. They just need to climb Mount Everest to get there.

“Loren Hale is an alcoholic beverage and he doesn’t even know it.”

Not only did I LOVE this book (which doesn’t happen often), but I also really enjoyed the side characters. I LOVED THEM. Normally I could care less, but the more I read the more I couldn’t wait for them to grace the pages. Trust me- You’ll feel the same way! Ryke, Connor, Rose… even Daisy and the parents! They all have a way of working themselves into the story slowly to where I wanted more of them. Once I finished this book, I found out they’re getting their own books AND. I. CAN’T. WAIT!! Especially Connor and Rose. I want that book NOW!!

There is one thing that Lily loves to do to help remedy her craving that I didn’t care to read so much of. It was a little overdone in my eyes. I get it, but I didn’t like it. I guess maybe because I don’t see how it could help, but then again I’ve never dealt with this kind of addiction before. Either way, this book was fantastic. I couldn’t get enough of it!

Krista and Becca Ritchie are the new voices of the Indie world- People need to watch out! Their words ring true as does their emotional story. It’s edgy, new and should not be missed! The plot, character development… it was such a breath of fresh air to read. I honestly loved it. I haven’t been this excited for a series in a long time. To say I’m dying for the next book to be released in an understatement! I’m going into full on stalker mode so I don’t miss a beat from them.

Anytime I hear Kings of Leon ‘The End’ and ‘Revelry’ makes me think of this book.