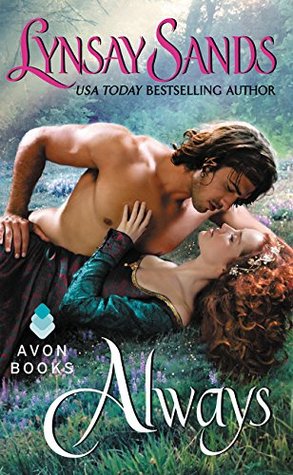 Always was a fun, romantic read that left my heart full.

Rosamunde was raised in a convent and prepared to take the veil to become a nun. But her father, King Henry, had a different path in mind for his illegitimate daughter. She was his favorite after all, and he would see that she was well cared for and loved.
Aric, just ending his engagement to a cheating harlot and left with major trust issues, had absolutely no desire to ever marry. King Henry, however, gave him no say in the matter. Aric was always the king’s first choice when thinking of a husband for his daughter. And thanks to Aric’s recent single status, the king gets what he wants.
Of course it isn’t exactly marital bliss for the newly wedded couple. There are plenty of bumps to smooth out. Which is to be expected from two strangers unexpectedly thrown together.
Rosamunde may be the king’s daughter, but she is in no way spoiled. Raised to be fully self-efficient and reliable, she is used to caring and tending to her own matters. Her main responsibility and passion at the convent was working in the stables with the animals. Aric, however, still feeling the effects of his ex-betrothed, lets his jealousy and fears consume him in regards to Rosamunde. He stifles and tries to control her actions, thinking that by limiting her he can prevent her from being unfaithful. Sadly, he misses the point that Rosamunde is nothing like his vile ex or other women from his past. But, he will learn.
There were quite a few times throughout the story that had me shaking with laughter. Obviously, Rosamunde is naïve when it comes to matters of the bedroom, and one really shouldn’t get sex advice from a nun and a bishop. Just…no. I felt for Aric during those times. He actually feared bedding his wife at one point. Then there was her affinity for caring for animals. There’s a scene where she’s nursing a horse back to health that you really need to read for yourself. It was hilarious.
Best of all about this book though was seeing these two people slowly come to trust in each other and love one another–to the point where they’d risk their own lives for the other. Watching Aric come to learn what is was to be truly loved and cared for and feel those things in return is pretty heartwarming. And seeing Rosamunde bloom from a young woman out of her element into a strong, fierce protector and lover is pretty amazing.
This was a 4 star read for me.

A bold, seductive laird meets his passionate match in a scintillating Highland romance from New York Times bestselling author Lynsay Sands.
Sword fighting, swearing, and riding astride come naturally to Saidh Buchanan. Simpering and holding her tongue-definitely not. Raised alongside seven boisterous brothers, Saidh has little interest in saddling herself with a husband…until she glimpses the new Laird MacDonnell bathing naked in the loch. Though she’s far from a proper lady, the brawny Highlander makes Saidh feel every inch a woman.
She has an angel’s looks, a warrior’s temper, and seeks out his kisses with wanton eagerness. Little wonder that Greer is intrigued by his comely guest. When reckless desire overtakes them, he’s more than willing to make an honest woman of her. But Saidh is the target of a hidden enemy, and Greer faces the battle of his life…to safeguard the woman he wants above all others.

It has been a long time since I have read any type of historical romance book so when I saw that Lynsay Sands had a historical series I was very excited.  I have been a fan of hers for many years so I just knew this was one that I had to try.  I am so happy that I did, she made me want to read more historical romances, well to be more specific more of hers.  I plan on getting the previous two books in this series to read as well.  Yep I didn’t read the previous two but I am going to rectify that very quickly. The Highlander Takes A Bride was funny, had the right amount of suspense, had a sassy heroine who I loved and a hero who I want for my own.  This is one book that historical romance lovers need to check out, especially if you like a bit of humor as well.

Author Info
LYNSAY SANDS is the nationally bestselling author of the Argeneau/Rogue Hunter vampire series, as well as numerous historicals and anthologies. She’s been writing stories since grade school and considers herself incredibly lucky to be able to make a career out of it. Her hope is that readers can get away from their everyday stress through her stories, and if there’s occasional uncontrollable fits of laughter, that’s just a big bonus. Please visit her on the web at www.lynsaysands.net.
Author Links:  Website | Facebook | Twitter | Goodreads
Website:  http://www.lynsaysands.net/
Facebook:  http://www.facebook.com/lynsay.sands
Twitter:  http://twitter.com/lynsaysands
GoodReads:  http://twitter.com/lynsaysands

Let’s split this in the two obligated parts that correspond:

Lynsay Sands bought my loyalty when she wrote Lucern Argeneau’s story “Single White Vampire”. For those who DON’T read the RT Book Reviews magazine you may not understand several jokes inside the story, but making a MALE romance novel writer attend the RT Book Lovers Convention is possibly a HUGE task. Inside the convention several things happen and at the end you fall in love with the whole Argeneau clan as much as Lucern falls in love with Kate.

12 books and several short stories later, THE GIFT made me just want to ask for my money back….

I just can’t (no matter how much I tried) imagine a 64 year old man lusting after a 25 yr old (LOOKING) woman. Now, granted shes over 2K yrs old, yes, BUT STILL! Picturing old Teddy Bruwnswick, fall in love IN A DAY! (actually less than 48 HOURS with a woman JUST because she convinces him she’s her life mate, is one of the most twisted and wack stories I have possibly read. Many will disagree, but don’t get me wrong! I love Teddy. He was possibly THE ONLY character that actually SAVED the entire book “The Accidental Vampire” (possibly the worst book in Sands Argeneau series) and made it survive the inevitable drowning as you could actually realize Sands is running out of ideas. But if he has been part of several books and is a well known character by now, don’t you agree with me that he at least deserved a BOOK instead of a story? Look at “The Reluctant Vampire” how come “Drina Argenis” and “Harper Stoyan” deserved an entire book (actually well written) and not Teddy??? Maybe my disappointment rounds the idea of unfairness towards some characters we have learned to love…Bitten by Cupid DID justice to Tiny and Mirabeau…but this one….Im sorry Mrs. Sands, you absolutely disappointed me beyond reason…

Cat and Bones…well, I worship Jeanine Frost’s hands and brain. Its like Cat & Bones live with her and she has seen every single adventure happen before her eyes. I just LOVE books written in first person. So maybe that’s why Cat never disappoints. I just wish it would’ve been longer. Possibly explain a little bit more, but i think that Bite Before Xmas should be enough for all of us her loyal readers…2 books and one story in a year must be EXHAUSTING! 🙂